ADCI is capable of GPU computing during sample processing, under the following conditions. ADCI uses CUDA to perform general-purpose GPU computing. It requires a NVIDIA video card (GPU) with computing capability 2.0 or higher.

Users need to have a GPU license authorized by Cytognomix Inc. in addition to the normal license to use GPU in ADCI. This GPU license is stored in your dongle.

Accelerated by GPU, ADCI is expected to process samples in higher speeds. Internal experiments at Cytognomix Inc. showed that sample processing with a NVIDIA GTX960M GPU is approximately twice faster than sample processing without GPU. The actual speedup for your computer will depend on your GPU devices and ADCI's GPU configuration.

Before obtaining a GPU license, users are encouraged to test their computer for GPU compatibility and performance.

When the test finishes, results will be displayed in the dialog (figure to the right). Users can see if ADCI succeeds or fails to use GPU in the test, as well as a time comparison between using GPU and using CPU.

For ADCI to benefit from GPU computing, the test has to be successful and the GPU should run faster than CPU in the test. 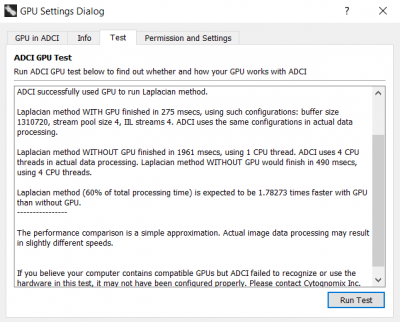 Users can check if they have a GPU license on their dongle.

In the GPU Settings Dialog, go to tab 'Permission and Settings'. In 'Users' GPU License', the 'GPU License' text box will say 'Authorized' if the attached dongle has a GPU license. Otherwise, it will say 'Unauthorized'.

The 'GPU Setting Dialog' in ADCI provides interfaces for users to view and control their GPU in ADCI. It can be opened in the 'Setting/GPU Setting' menu. In the dialog:

Tab 'GPU in ADCI' shows general introduction of the GPU function in ADCI.

Tab 'Info' shows queried information about GPUs on your computer. If your computer has compatible GPUs, they will be listed in the tab, along with their specifications.

Tab 'Test' provides a quick test in ADCI to compare the speeds when GPU is used and when GPU is not used. Users can test their GPU here if they have any concern before obtaining a GPU license from Cytognomix Inc. The test does not require a GPU license on users' dongle.

Tab 'Permission and Settings' displays GPU configurations in ADCI, as well as whether a GPU license exists on the current dongle. It also has a checkbox for users to enable/disable GPU usage in ADCI. Enabling the checkbox will not enable GPU acceleration if no GPU license exists on the dongle. We suggest users keep GPU enabled unless they want to intentionally measure processing time without using GPU.