Partial-body dose estimation requires a calibration curve with both an associated SVM sigma value and image selection model. These conditions will almost always be met if the calibration curve was generated using the curve calibration wizard. In the event either contidion is not met, the “enable” checkbox will be disabled and a tooltip describing the unmet condition will be displayed if the mouse is hovered over the disabled checkbox. 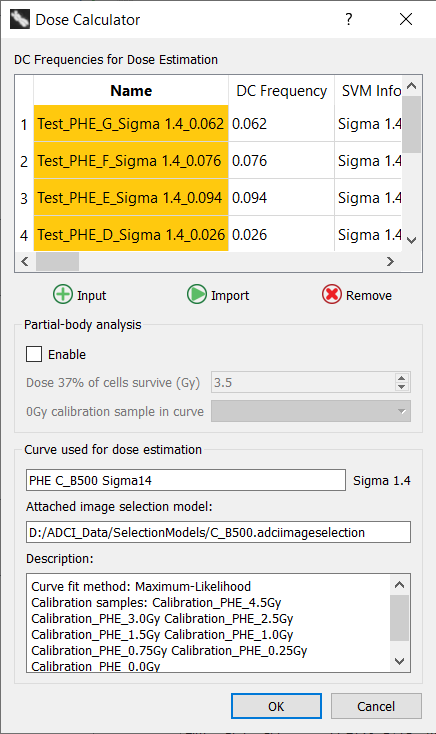 After clicking the “Enable” checkbox, the dose at which 37% of irradiated cells survive must be provided. It is pre-populated based on the value specified in the “Partial-body Preferences” dialog described at the end of this page. The value can be adjusted here either by typing in the desired value or by using the mouse wheel while hovering the mouse above the “Dose 37% of cells survive” spinbox.

Once all desired test samples are present in the Dose Calculator, a desired value for “Dose 37% of cells survive” is specified, and the appropriate 0Gy calibration sample is selected in the “0Gy calibration sample in curve” dropdown click the “OK” button to begin the analysis. After a short delay, a progress bar will display the progress of the dose estimation. 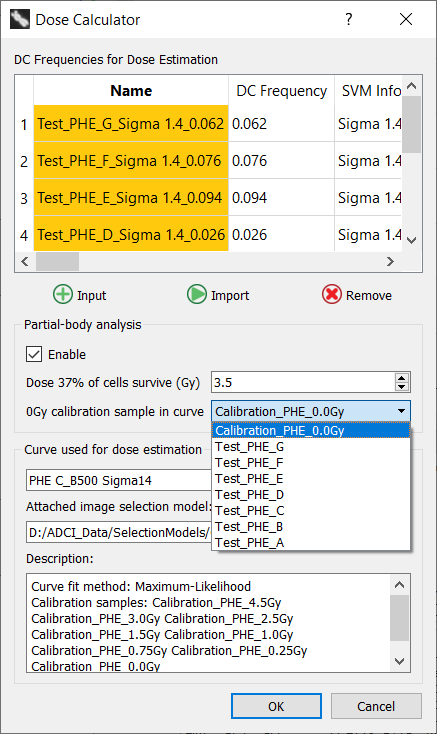 Access the “Partial-body Parameters” dialog through the menu bar location at the top of the main gui. Click “Settings” and then select “Partial-Body Preferences”.

A more detailed explanation of the partial-body algorithm utilized by ADCI can be found in our manuscript published in the International Journal of Radiation Biology (2020): Direct link to pdf

Although FP DCs in ADCI are minimized by morphological image filtering, they are not completely eliminated. The impact of remaining FP DCs on dose estimates of partially irradiated samples was not predictable and affected the accuracy of some estimates, especially at low-dose exposures. Here, we correct the overall DC frequencies by removing the estimated residual FPs after morphological filtering by assuming nearly all DCs detected in the 0Gy calibration sample are FPs. ADCI generates a user-defined number (default: 500) of randomly selected subsets of samples, each subset containing half the number of images present in the original 0Gy calibration sample, or a user-defined number (default: 500) of images, whichever is greater. ADCI then determines the DC frequency of each subset (after application of an image selection model) and calculates the standard deviation. A calibration curve adjusted for FPs is generated by reducing the observed 0Gy calibration sample DC frequency by two SD. DCs are then removed from all other calibration samples based on the residual DC count in the 0Gy sample. The 0Gy calibration sample DC frequency reduced by 2 SD is a conservative estimate of the minimum DC frequency which could reasonably be found in the sample. By removing this reduced number of FPs in test samples, we ensure that DC counts in test samples after FP adjustment are non-negative. 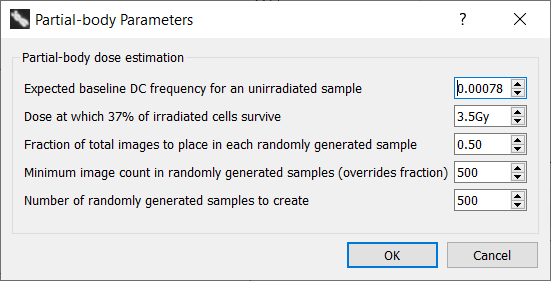